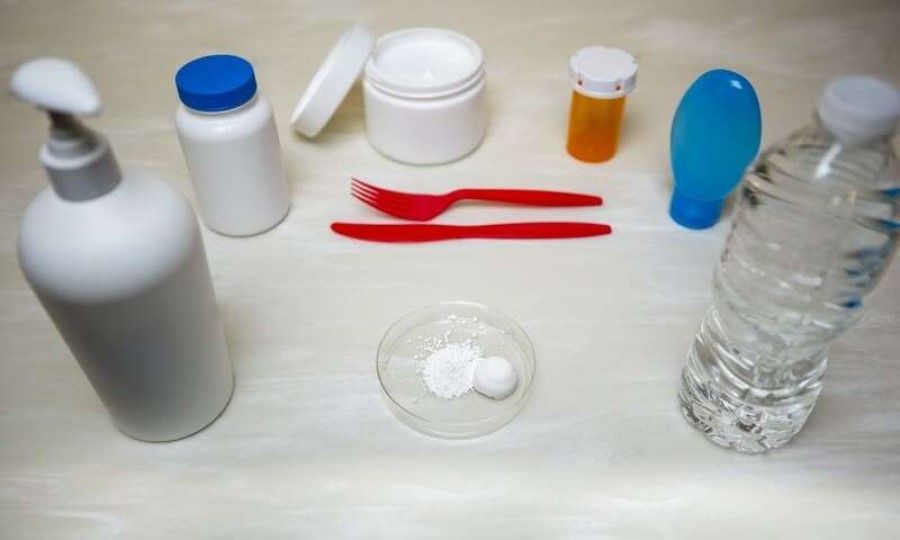 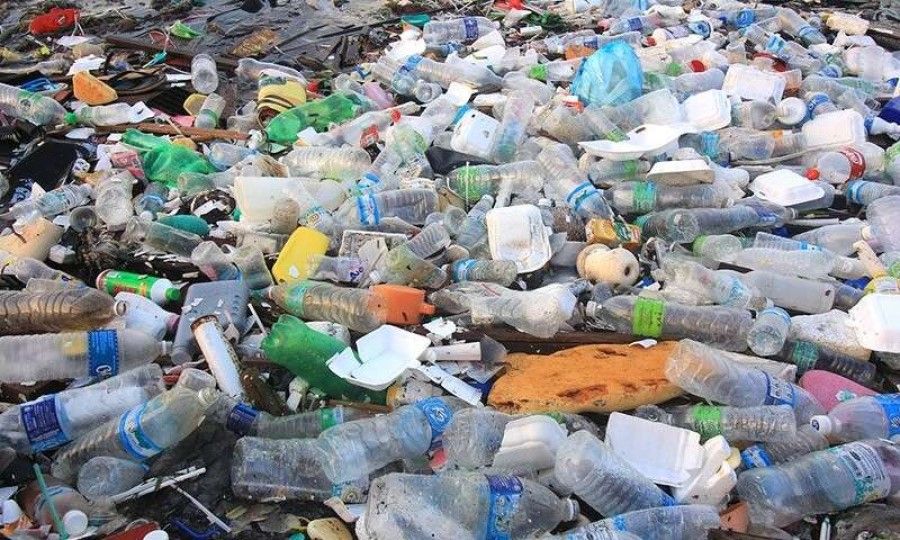 If you look up from your screen and glance around you, it’s nearly certain that there will be something made of synthetic plastic within arm’s reach (maybe even the clothing you’re wearing). Humans have only been manufacturing plastics for about 100 years, but we have already produced about 8,300 million metric tons of it since the 1950s—that’s roughly the weight of 25,000 Empire State Buildings. And because the vast majority of plastics do not biodegrade, nearly all of that century’s worth of plastic remains somewhere on planet Earth, from the guts of fish and seabirds to water-poisoning landfills to the Great Pacific Garbage Patch. And even if we can’t see them, microplastics now permeate the air we breathe and can end up in our lungs, and their health effects are not yet known

Plastics have become ubiquitous because they have many advantages over naturally occurring materials: they can be incredibly strong yet lightweight, they can be flexible or rigid (or both), they are waterproof, and they are cheap to manufacture and ship. The secret ingredient that makes plastics so robust and versatile is hydrocarbon polymers – long chains of carbon and hydrogen atoms strung together whose arrangement gives them those valuable properties. The addition of other elements to the hydrocarbons – such as oxygen, nitrogen, and sulfur – creates different types of plastics that are optimally suited for different tasks, from the delicate low-density polyethylene (LDPE) used to make plastic wrap to the incredibly durable polycarbonate, which is 200 times stronger than glass.

The very first plastics were created in the early 1900s by industrialists who were experimenting with some of the by-products produced from the refining of coal, a fossil fuel that is rich in hydrocarbons. When the USA entered World War II in 1941, the demand for plastic exploded as natural resources quickly became scarce. Plastics were used to manufacture crucial wartime supplies such as parachutes, ropes, windshields and tires at the large volumes that the military needed to equip its forces. The demand for plastics was so great that the US government provided subsidies to encourage companies to build manufacturing plants based on cheaper, more accessible petroleum (another carbon-based fossil fuel) rather than coal.

After the war was over, plastics producers shifted their focus to the domestic sphere, touting plastic alternatives as more sanitary, cheap, and modern than existing products. Plastic began to replace traditional materials in many objects like soda bottles, clothing, and packaging, and created entirely new products like Formica countertops, Tupperware, and Styrofoam. It seemed that nearly every aspect of life was destined to become plasticized. By the 1960s, however, the effects of the world’s open-armed embrace of plastics began to raise alarm. People started to notice plastic debris washing up on beaches, and evidence mounted that chemical additives leaching out of plastic products were harmful to both humans and the environment.

Despite these concerns, more sustainable alternatives to plastic have not yet successfully replaced it. Petrochemical companies still receive tens of billions of dollars in government subsidies annually that keep petroleum-based plastics cheap, and more eco-friendly ‘bioplastics’ derived from biological materials currently make up less than 1% of the total plastics market. Most bioplastics are produced by fermenting the starches, sugars, and cellulose found in plants to produce ethanol, or lactic acid, which is then refined into the chemical building blocks used to make plastics. However, scaling up this process to meet the world’s current demand would require so much land to grow the needed plants that we would destroy entire habitats and threaten our own food supply.

Fortunately for the world, Wyss Institute Research Scientists Shannon Nangle and Marika Ziesack are taking on this problem by developing a cheap source of plastics that are biodegradable, don’t require the use of plants at all, and have a negligible carbon footprint: microbes.

While most of us think of bacteria as ‘bugs’ that are either ‘good’ (the ones living in our intestines) or ‘bad’ (the ones that cause infections), Nangle and Ziesack see them as tiny factories that can be engineered to produce the polymer building blocks of plastics more easily and sustainably than refining them from petroleum or plants.

“Like all living organisms, bacteria need to take in food, extract energy and nutrients from it, and excrete waste in order to survive,” said Ziesack. “Bacteria are very easy to grow and control, so scientists have been studying their inner workings for a long time, and we are now at a point where we can manipulate them genetically and metabolically to change what they’re eating and what they’re producing.”

She and Nangle have been experimenting with microbe-based plastics since 2017, when they were inspired by the Bionic Leaf project that their advisor, Wyss Core Faculty member Pamela Silver, co-created. They honed-in on a specific microbe called Cupriavidus necator, which takes in hydrogen and carbon dioxide gases and uses a process called gas fermentation to convert them into essential molecules. One of the compounds the microbe produces is a polymer called PHB, a kind of polyester that it uses as a form of energy storage. PHB itself is not a great polymer for plastics – it is very brittle and is difficult to manufacture objects from – but Ziesack and Nangle have found a way to tweak the microbe’s metabolism so that it produces a similar polyester called PHA instead, which is more flexible and is already being investigated as a biodegradable plastic alternative.

“Biodegradable PHAs are not a new idea, but so far nobody has been able to make them cheaply enough that they could compete with petroleum-based polyesters,” added Nangle. “Our microbes can dramatically reduce the price of producing these polymers because we’re feeding them gases rather than expensive precursor compounds, and we’re avoiding all the economic and environmental costs of industrial agriculture that are baked into the price of plant-based bioplastics.”

While polyesters like PHA are only one of the many types of polymers that go into different kinds of plastic today, Nangle and Ziesack think that with the right engineering, their system could produce polyesters with different properties that mimic other types of polymers. “The beauty of PHAs is that they can be extensively modified, so if we can expand the scope of compounds that our microbes can produce, we could create materials with characteristics that are equivalent to other petrochemicals, even though their chemical structure is different,” continued Ziesack.

Encouraged by their success in the lab and their project’s potential to help solve the worldwide ‘plastics problem’, Ziesack and Nangle submitted an Institute Project application for their project, now called ‘Circe’, and have been working with industrial, investment and business development partners to further advance their technology technically and commercially to maximize near-term commercial success. While getting their system to work in the lab was a significant scientific challenge, getting it out of the lab and into a production facility is a completely different set of hurdles that they are overcoming one stride at a time.

“We want to create a business plan for a system that is actually fully sustainable from beginning to end, where we have thought through and planned for every stage of a product’s life-cycle so that when a consumer is finished using it, it will take care of itself [by biodegrading],” said Nangle. “It can be tricky to convince investors that an academic lab-scale experiment is commercially viable, and receiving support as an Institute Project has been critical for allowing us to demonstrate that this system can work in the real world, and can make a real impact.”

Circe’s creators even have plans for how their microbes could be used beyond the ‘real world’ in places where neither fossil fuels nor plants are available – like outer space. One day, these microbes could be transported to human settlements on other planets where they could be used to manufacture everything from building materials to food and support our species’ exploration of other worlds.

“We really don’t know yet what the limits of this technology are, because making plastics from microbes at a large scale has only recently been developed and implemented,” concluded Ziesack. “But we’re committed to taking this project as far as it can go, and if one day that means Mars – that will be amazing.”