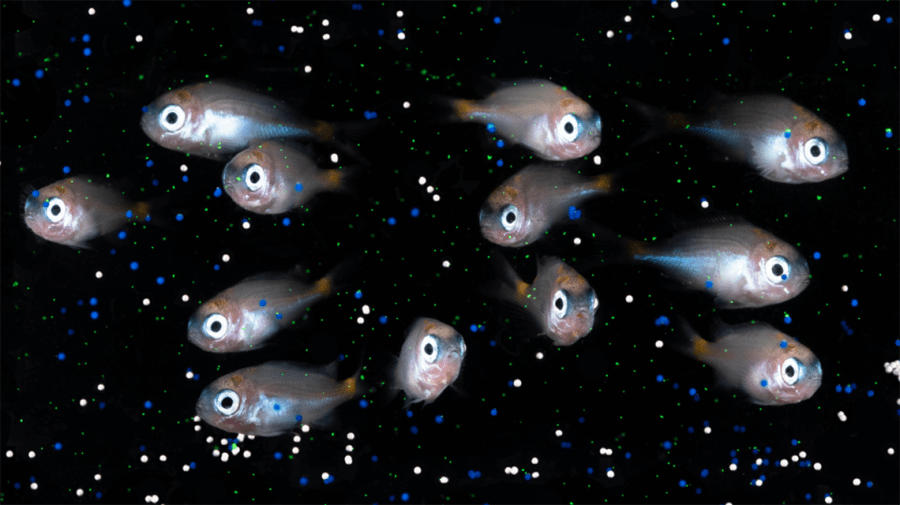 Plastic debris is one of the most serious environmental challenges our oceans face. It affects marine organisms, habitats and ecosystems, as well as the health and well-being of people, particularly those dependent on the oceans. Smaller plastic particles are especially dangerous because they are easily ingested and can enter organs and body fluids of organisms and thus propagate up the food chain. The fact that these particles are also co-contaminated with various chemicals and other pollutants makes accurate assessments of the effects and toxicity of plastic pollution challenging

A group of scientists led by the International Atomic Energy Agency (IAEA) has recently published a comprehensive review on the effects on fish of ‘virgin’ micro and nano-plastics – tiny plastic particles such as resin pellets used in plastics manufacturing. The review, published in the journal Environmental Science and Technology in March 2020, revealed that in one third of all studies assessed, such virgin plastic particles were indeed affecting biological functions in fish, such as their behavior and neurological functions, as well as their metabolism, intestinal permeability and intestinal microbiome diversity.

“Accurate monitoring is crucial for understanding the effect these particles have on organisms as well as for designing effective environmental management and mitigation strategies,” said Marc Metian, research scientist at the IAEA Radioecology Laboratory and one of the co-authors of the research paper.

Some of these strategies, such as accurate assessments of cellular- to ecosystem-level impacts, or the production of new, degradable plastic materials that are more environmentally friendly, could involve nuclear and isotopic techniques that the IAEA can provide support with. Identifying those strategies will be the next step.

According to the UN Environment Programme, eight million tonnes of plastic end up in the world’s oceans every year, often carried there by rivers. If the trend continues, by 2050 our oceans could contain more plastic than fish.

Environmental plastic pollution has become a major ecological and societal concern. Plastic pollutants vary widely in size, from large debris, such as fishing nets and single-use plastic bags, to invisible nano-sized plastic particles. While the visible impact of large plastic debris, so-called macroplastics, in marine environments has been well documented, the potential harm caused by microplastics and even more by nanoplastics is much less clear.

Plastic particles smaller than 5mm in length are called microplastics. The even smaller ones, with a size equal to or less than 100nm (one 10,000th of a millimeter) are called nanoplastics. They are so tiny that you cannot see them with the naked eye or even with an ordinary optical microscope.

Over the past decade, the global scientific community has invested substantial work into advancing the knowledge of the impact of plastic debris on diverse aquatic organisms. However, monitoring methods for small microplastics and nanoplastics are still in the development phase, which means that their exact concentration in the oceans remains unknown.

“This is where nuclear technology can play an important role,” added Metian. “Nuclear and isotopic techniques are already successfully used to study pollution processes. Their advantage is that they are highly sensitive and precise and can be used similarly to study small microplastic and nanoplastic movement and impact.”